In partnership with Ozeankind, Chumbe Island successfully carried out four beach clean ups, over the period of November and December 2020.

For these clean up events, the Chumbe Clean Up team introduced a systematic method of collecting and recording washed up marine litter with which our team was able to establish a baseline dataset for Chumbe Island that we can continue build up over time.

The method involves buddy teams who are collecting and recording litter along pre-defined transects (see demarcations of all 8 transects in picture). The collected litter is then sorted into three categories (glass, metal, plastic), weighted accordingly and then picked up by Chumbe’s partners Zanrec and Chako for recycling.

This approach allows us to analyse how much litter the ocean currents are bringing to the island, where the hotspots of accumulation are, as well as composition and origin of the litter. We can find out more about litter origin with the help of product bar codes if they are still present: The first 3 barcode digits represent an international code and describe where the product has originated.

As November and December lie in the season of short and heavy rainfalls and increased windspeed, we expected that litter from urban centres will be washed into the ocean in higher numbers than during other months. For Chumbe, this would mean that with every high tide, increased amounts of litter are washed up from two directions: from Dar es Salaam in the South-East or from Stone Town in the North-West.

This is what we found: 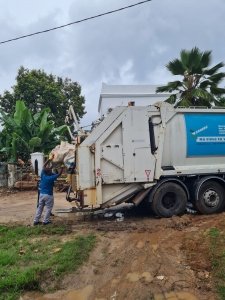