The Coconut crab (Birgus latro), also called Robber crab, is with a carapace diameter of up to 45 cm the largest land-living crab in the world. The ommon name derives from the crab’s ability to climb coconut trees where it easily cracks coconuts, its favourite food, with powerful claws. The crabs have volved to live on land but begin their life in the sea, later adopting shells as houses for protection until they grow large enough to manage with just their ardened carapace alone. A curled-under abdomen gives these crabs a lobster-like appearance.Unfortunately, Coconut crabs are hunted for their tasty meat and they are also used as fish bait, therefore, becoming locally extinct in areas close to human settlements, such as Zanzibar. Research into this species is extremely limited in the East African region and this disappearing species is unfortunately still listed as data deficient in the IUCN endangered species listing, as nobody knows how many are left! A Coconut crab population of more than 300 reported individuals is still found on Chumbe Island which has become a study base for international researchers and students.

Our trained guiding rangers are taking overnight guests regularly to the forest to look out for these fascinating, night-active creatures! 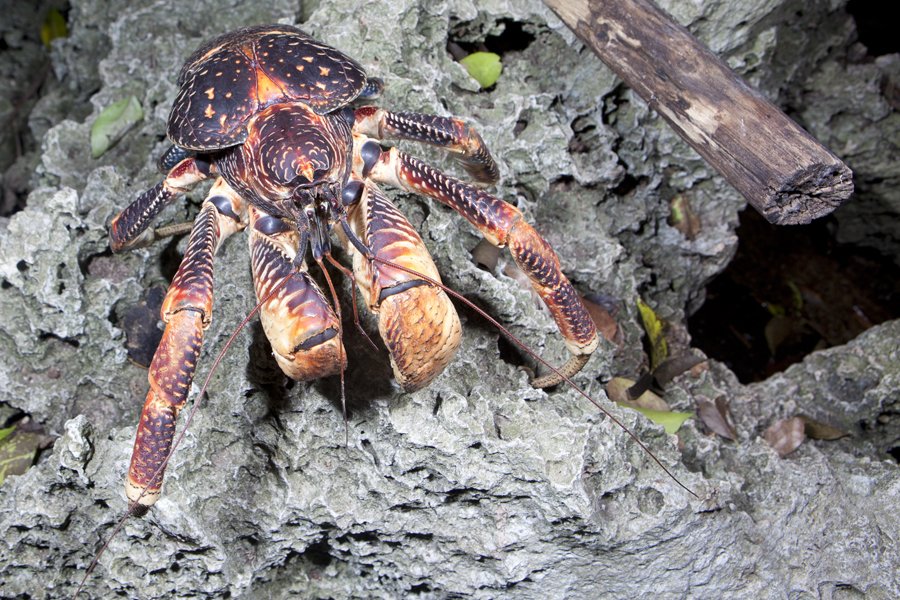 The Aders’ duiker (Cephalophus adersi) is one of the smallest and most distinctive of Africa’s mini-antelopes, being readily distinguished by the wide white band across the rump. As in other duikers, the body shape is adapted for easy movement through dense undergrowth, being small and stocky, with large hindquarters, an arched back, relatively short legs, and pointed hooves. Both sexes have short pointed horns.

The Ader’s duiker ranks as one of the most threatened antelope species in the world, accepted to be extinct in its original range on the African mainland coastal thicket and forests of the Kenyan coast. Today, only a relict population survives on Zanzibar (Unguja) and this small population continues to decrease as a result of habitat destruction and uncontrolled hunting despite being protected by Zanzibar law.

In order to improve the future of this threatened species, CHICOP began to work with the Department of Forestry towards the establishment of an Ader’s duiker sanctuary in the Chumbe Forest Reserve in 1995. In 1998 and 2000 a small breeding population of 6 Ader’s duikers was then translocated from Mtende Region to the fully protected Forest Reserve of Chumbe Island. Monitoring procedures have since been in place and the latest survey from 2012 confirmed at least four adult individuals and one juvenile. Spotting these very shy animals is not easy but our guests are part of our observer team and each encounter is recorded. 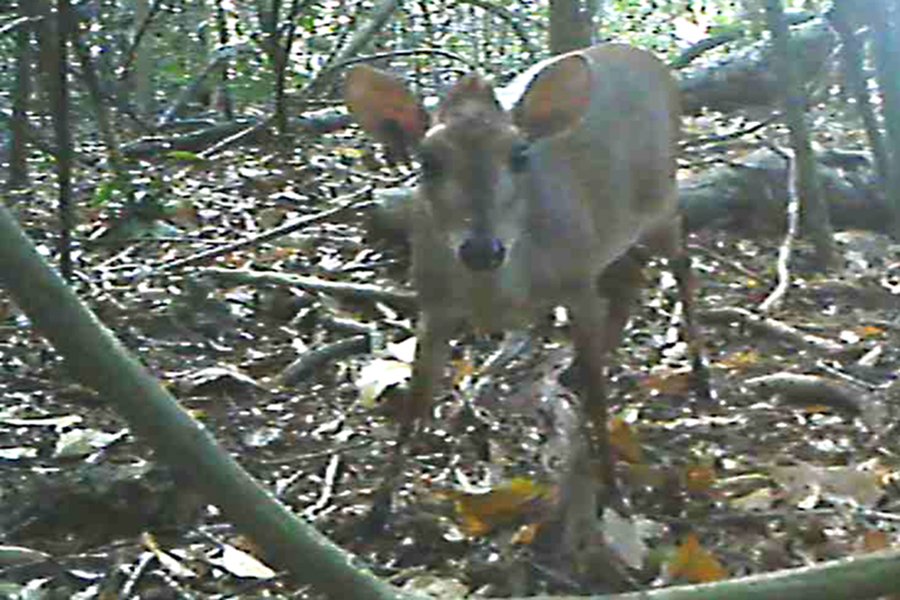 The Roseate tern (Sterna dougallii) is similar in size to a Common tern (Sterna hirundo) but very white-looking, with long tail-streamers, a black cap and a black beak with a reddish base. In summer adults have a pinkish tinge to their underbelly which gives them their name.

In Zanzibar the Roseate tern is a rare migratory coastal seabird. The species is listed on the IUCN Red List, however, with the status ‘Least Concern’ due to an extremely large global range and an estimated global population of about 70,000 – 82,000 individuals. Roseate terns are threatened by hunting in the wintering quarters, habitat loss and extreme weather events which can cause local extinction of some colonies. In 1994, 2006 and 2012 large breeding colonies settled on Chumbe’s small islets in the south for a period of about 3 months each. These colonies have been closely monitored and detailed reports produced. 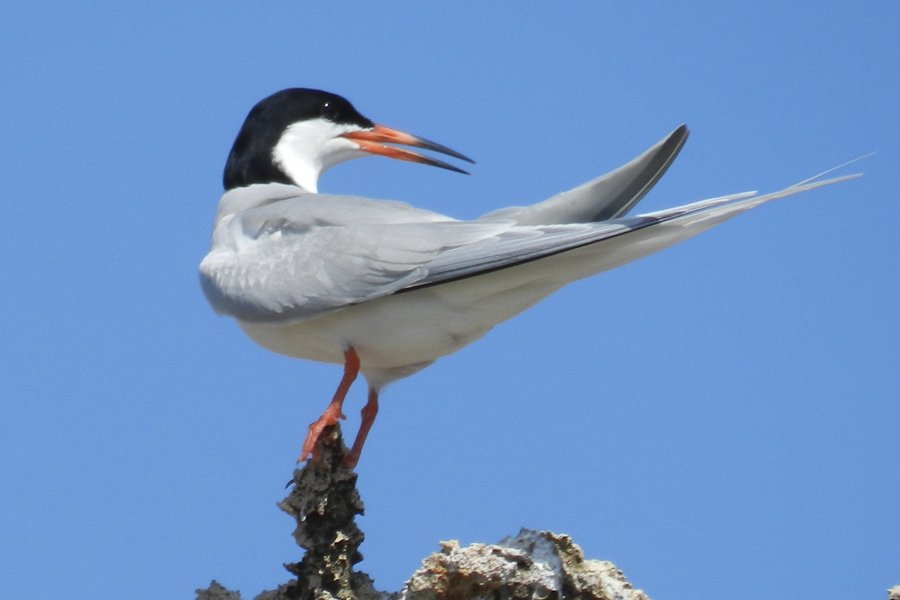 Green turtles (Chelonia mydas) are the second largest of marine turtles and their name comes from the color of their fat, not their shell, as commonly believed. Their beak is sharp and finely serrated, perfectly adapted for grazing in seagrass beds and scraping algae off of hard surfaces. They are listed as endangered by the IUCN Red List. Considered by many to be even more beautiful because of its colorful shell, is the Hawksbill turtle (Eretmochelys imbricate) which is found in tropical waters around the world. Named for its narrow head and sharp, bird-like beak, hawksbills can reach into cracks and crevices of coral reefs looking for food. Their diet is very specialized, feeding almost exclusively on sponges. Hawksbill turtles are listed as critically endangered by the IUCN Red List.

Although turtle conservation and management efforts are underway in some areas of Tanzania, many questions regarding population dynamics, nesting populations, feeding and developmental habitats remain unanswered. As such the status of turtles in Tanzania remains largely unknown. Exploitation of turtles for meat and eggs is commonplace, coastal development is mostly unregulated and gillnets and prawn trawling pose a serious threat in inshore waters.

Our guests can regularly spot marine turtles feeding or resting in the Chumbe Reef Sanctuary. If you don’t hassle and touch them, they may allow you to accompany them for a long time without showing signs of disturbance. 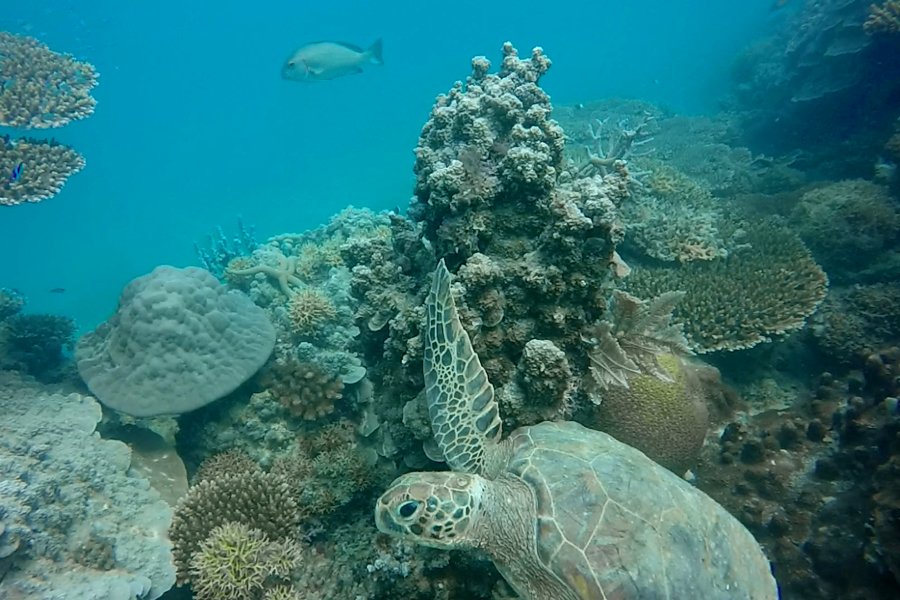 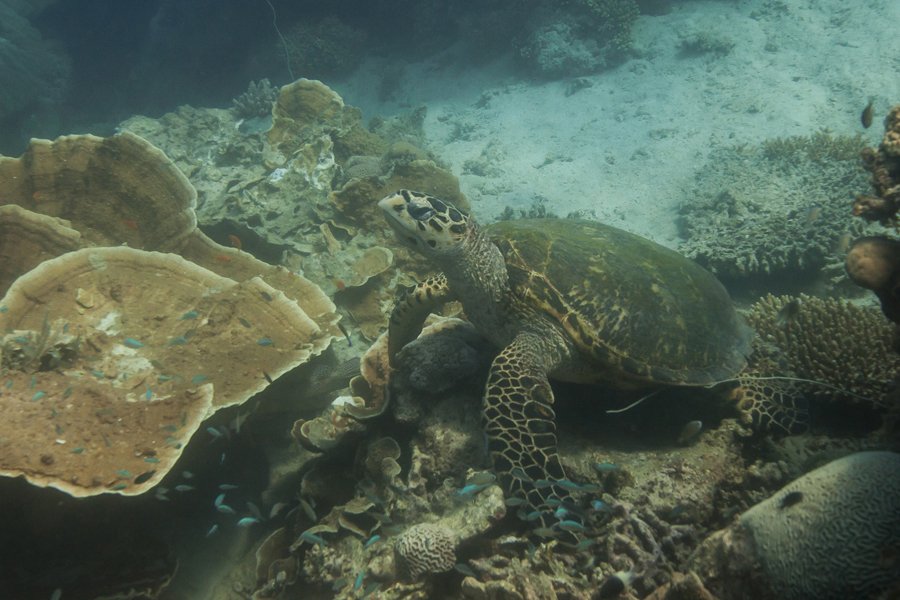 They can reach 15 meters in length, weigh up to 40 tonnes (about six times an elephant) and watching them in their natural environment, breaching and blowing is unforgettable: humpback whales!

Between 400 and 600 humpback whales (Megaptera novaeangliae) are sighted annually between July and October off Zanzibar. After their passage through east African waters, the whales move beyond the Mozambique Channel southwards, swimming over 2,500 miles (4,000 km) to the cold, nutrient-rich waters of Antarctica to feed on the abundant summer stocks of krill and schooling fish.

August and September are usually busy months for humpbacks around Chumbe Island. Once they arrive, we can often hear their songs during snorkeling in the Coral Reef Sanctuary and spot them from our lighthouse. During that time all Chumbe guests are warmly welcome to join our ‘whale watching team’. In 2009 Chumbe’s conservation team joined a regional whale sighting project and has since participated by filling in a standardized recording form whenever there is a whale sighting around Chumbe Island. The sighting records are compiled and compared to previous years in order to get a better understanding of seasonal movements and abundance which then helps to generate awareness and encourage co-existence. Threats to humpbacks visiting eastern African waters include deepwater gill-nets (entanglement), dynamite fishing (keeps them away from shore), oil and gas exploration (disturbance) and tourism (harassment).